Bury Doubt and Rise in the Truth

Joy of Mary: Resurrection of Jesus
“I found him whom my soul loves.” ~ Song of Songs 3:4
By Victoria Clarizio 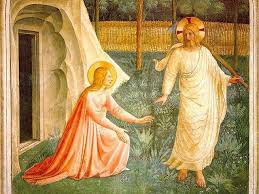 Although it is not recorded in Scripture, Tradition has assumed that Christ must have appeared first to His mother after His resurrection. How could He not? We find this in the writings of some of the earliest Church Fathers.

During Christ’s earthly ministry, Mary was praised for being His mother. While this was a great honor, He quickly praised her for an even greater attribute: her faith.

‘While he was speaking, a woman from the crowd called out and said to him, “Blessed is the womb that carried you and the breasts at which you nursed.” He replied, “Rather, blessed are those who hear the word of God and observe it.”’ (Luke 11:27-28)

It makes sense that the one who had the greatest faith would be the first to witness Christ’s resurrection. Mary alone did not doubt or despair at the cross.

Mary’s faith, as it is for us, must have been a great example for Jesus’s first followers. They had seen Him raise others from the dead, such as Lazarus. Perhaps Martha echoed Mary’s faith when she expressed complete trust by saying to Jesus, “Lord, if you had been here, my brother would not have died. [But] even now I know that whatever you ask of God, God will give you.” (John 11:21-22) At the cross, Mary would have remembered and believed the promise that her Son would reign forever. At the Annunciation, Mary was not afraid to wonder how God’s plan would come about even as she believed with complete certainty that it would. Perhaps Mary also wondered at the cross how God’s promises would be fulfilled – the promise of her Son that He would rise from the dead.

Imagine the joy when they were reunited! It must have surpassed the joy of the nativity, their first meeting. Perhaps this moment was so sacred, so intimate, that the Gospel writers did not dare to attempt to describe it.

In his Wednesday audience on May 21, 1997, Saint John Paul II, spoke of this meeting between Christ and His mother. John Paul II shed light on what this encounter teaches us:

“Present at Calvary on Good Friday (cf. Jn 19:25) and in the Upper Room on Pentecost (cf. Acts 1:14), the Blessed Virgin too was probably a privileged witness of Christ’s Resurrection, completing in this way her participation in all the essential moments of the paschal mystery. Welcoming the risen Jesus, Mary is also a sign and an anticipation of humanity, which hopes to achieve its fulfillment through the resurrection of the dead.”

Mary was present with Jesus throughout His life, but especially in His suffering, death, and resurrection. Mary is also with us in every moment of our lives, in every joy and sorrow, to teach us how to trust and to press on towards that joy which awaits us in heaven, where we will finally be reunited with her Son.

Sorrow of Mary: The Burial of Jesus by Joseph of Arimathea
“Whoever serves me must follow me, and where I am, there also where my servant be” ~ John 12:26
By Thomas Conroy 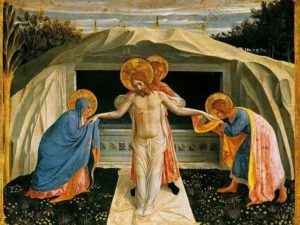 The Burial of Christ, Fra Angelico

The Victor, whose body was dead and broken, was laid in the tomb. The bonds of sin are broken, and Satan trembles on his infernal throne, but on Earth all is still. His story seems to be finished, and the final acts were a kind burial by His disciples, and a last terrible thorn in the heart of His Mother.

First, to say a word about the disciples. The body of our Lord, who had just undergone horrible torture and agony, was thought cursed and abandoned by God “God’s curse rests on him who hangs on a tree.” (Deut 21:23) Their hopes for a worldly Savior had died, and any association with Him would have made their lives difficult, bringing down the ire of those who had crucified the Lord of Glory. Yet they had the courage to give what they thought was one last gift to their teacher, a proper burial. The smallest respect paid to His sacred Body will not go unrewarded.

The second is the sorrow of the Blessed Virgin Mary on seeing her Son laid in a tomb. “Where has your lover gone, O most beautiful among women? Where has your lover gone that we may seek him with you?” (Song 6:1) He has passed through the door, beyond the waking world. And her heart, so full of love, is now filled with sorrow and sadness for her Son whose life was spent, whose blood had been poured out for us.

In this earthly life love, true love, involves a type of union with the one we love. Their joys become our joys, their sorrows become our sorrows. This is seen among family relations, where a mother feels very deeply the pain of her child. With Christ and His Mother there was a perfect union with His suffering heart on the Cross, and now when Christ died, there seemed to be an empty abyss. It was as if the light of the sun and all the stars had been blotted out from the sky.

To paraphrase St. Alphonsus Liguori (Of the Dolours of Mary), Mary’s intense suffering is one of the reasons why she is called Queen of Martyrs. Other martyrs suffered on account of their love of Christ, Mary suffered because of her love. If she had not loved, she would not have suffered as she did because Christ himself was the indirect instrument of her suffering. What struck His flesh struck her soul, revilements flung on Him fell on her. Her suffering is not in vain, however. To take her as an example, to look at the bottom of the chalice of suffering is not to find nothing as the nihilists would have us believe, but to find a crucified God. At the bottom of her immeasurable pain, she found her Son. Our wounds and sorrows can be used to ascend to Him.

O Most Blessed Queen, when faced with such love and sorrow, all speech fails. Please, unite us with your Son. “Let me share with you his pain, who for all our sins was slain, who for me in torments died.” (Stabat Mater Dolorosa)

These past few months have surely been filled with many unexpected difficulties and challenges, yet there were probably also many little blessings and surprising gifts as well…maybe even ones that were hard to see at first. Human life is full of joys and sorrows; so too was the beautiful life of the Blessed Mother, who was entirely conformed to the will of God from the moment of her conception. The joys and sorrows of her life form the jewels of her heavenly crown and, at this very moment, she sits beside her Son on the throne of Heaven and intercedes for us.

Now, more than ever, we are called to unite our happiness and our suffering to the Immaculate Heart of Mary. In doing so, she gently leads us to the merciful Heart of Our Lord and the ineffable love of the Trinity. Please join us this summer as we contemplate the joys and sorrows of the heart of Mary in our series, The Coronation of Love; The Joys and Sorrows of Mary. Each week, we will explore a paired joy and sorrow of Mary which will help us to further unite our pondering hearts to that of the Blessed Virgin. We look forward to praying through these mysteries of our faith with you. God bless!

In the Peace and Love of Christ,
Gretchen, Thomas, Victoria & Patrick

Hi! My name is Patrick Kelly, and I am an aspirant with the Dominican Friars of the Province of St. Joseph (Eastern Province). I grew up and live in Virginia. I am in my second 6-month fundraising period with the Laboure Society. I am hoping to mitigate my student loan debt in time to enter the Novitiate next summer.
Watch My Video   Read My Story   Donate   Contact

Hi! My name is Victoria Clarizio and I am an aspirant with the Passionist Nuns of the Monastery of Our Lady of Sorrows in Pittsburgh, Pennsylvania. I am from Connecticut and live there currently. As an aspirant with the Laboure Society, I hope to remove the obstacle of student debt so that my classmates and I can enter formation.
Video  Story  Donate  Contact

Hi my name is Thomas Conroy, and I am an aspirant with the Dominican Friars of the Province of St. Joseph (Eastern Province). I was born and mostly raised in Northern Virginia. I graduated from Mount St. Mary’s University in 2019. I am in my second 6 month fundraising period with the Labouré Society. I am hoping to have my student debt mitigated and enter formation next summer. Video  Story  Donate   Contact