Flee to Adore Him

Joy of Mary: Adoration of the Magi
By Thomas Conroy 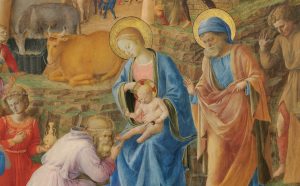 The Adoration of the Magi, Fra Angelico

“After their audience with the king they set out. And behold, the star that they had seen at its rising preceded them, until it came and stopped over the place where the child was.They were overjoyed at seeing the star, and on entering the house they saw the child with Mary his mother. They prostrated themselves and did him homage. Then they opened their treasures and offered him gifts of gold, frankincense, and myrrh.”
Mattew  2:9-11

In the adoration of the Magi we see the splendor of faith, three kings, princes of their people, bowing down before a plain child in a manger. Their view was not of earthly goods and power, but those of above. As St. Thomas says in his commentary on the gospel of St. Matthew: “seeing worthless things, and considering the things most high, they were moved to admiration, and adored him.”(Commentary on Matthew)

It was not earthly riches that they sought, not looking for an ostentatious display of wealth and luxury. They found not the lavishness of Herod’s palace or the splendor of Caesar’s abode but a humble dwelling and a poor woman tending her child. The treasure they were seeking was infinitely more precious than anything this poor earth could offer. “Because all gold, in view of her, is a little sand.” (Wis 7:9)

It was not worldly show or honor that they sought, for they found that in Jerusalem, with Herod the Great and all his counselors, and all the pomp and circumstances that befits royal dignity. For what this King desired was not titles but humility, not worldly esteem but rather true love. And it was this glory, the glory of God Incarnate, that they sought.

It was not earthly wisdom that they sought, there was no Solomon the Wise with his majesty and splendor, whose regal wisdom people from lands far away came to hear. They may have heard of the wisdom of the Greeks, of Athens and the Areopagus where truly wise men come to hear words of erudition from silver tongued philosophers. Instead, they found their wisdom on the lips of a stammering babe.

It was, perhaps, the greatest deference and respect any worldly authority or figure of importance showed Him over the course of his entire written life. All the other great kings and rulers either dismiss Him or let Him be killed. But it was these pilgrims who saw and recognized the true King, coming in humble form.

His first coming was in poverty, ignored and hated by the world and recognized by only a few who were given true knowledge. His next coming will be in glory and seen by all, and He will be surrounded by angels and the powers of heaven.“I am the Alpha and the Omega, the first and the last, the beginning and the end.” (Rev 22:1) Come, Lord Jesus!

The Flight into Egypt, Fra Angelico

Sorrow of Mary: The Flight into Egypt
By Victoria Clarizio

“For the vision still has its time, presses on to fulfillment, and will not disappoint;
If it delays, wait for it, it will surely come, it will not be late.”
Habakkuk 2:3

Our faith is full of paradoxes. The ways of God are so mysterious and our vision is so limited. How often are we baffled by the way He allows things to unfold, only to discover why months or years later? The irony of the Holy Family’s flight into Egypt could not have been lost on Mary, whose faith was greater than ours. She must have had a clearer sense of the way God had been working, putting everything into place throughout the history of her people, to be fulfilled by the birth of her Son.

When in a dream, Joseph was told to take his family into Egypt, how could they not think of the significance of this command? Their people had fought so hard, suffered so much at the hands of the Egyptians, and had finally escaped. Yet, God was telling them to go back.

Even how the Israelites had ended up in Egypt in the first place is significant. In the story of the first Joseph we see how God allows certain things to take place to fulfill His plan. Joseph was sold into slavery in Egypt by his brothers. But when a famine struck Egypt and the surrounding lands, Joseph was given supernatural wisdom to know how to preserve grain so that the people would not starve. When Joseph reveals to his brothers that he is alive and well, he tells them not to regret what they did. God worked a greater good out of their sinful actions. As the first Joseph preserved the earthly grain, so Joseph, the husband of Mary, preserved the heavenly grain which would become the Eucharist, the bread of life.

The first Joseph brought his people to Egypt but many years later the Pharaoh became afraid that the Israelites would rebel, so he killed all of their first born sons. Out of fear of Jesus, Herod made the same decree as the Egyptian Pharaoh – that all male Israelite infants in Bethlehem should be murdered.

In Matthew’s gospel the phrase is often repeated, “so that the scriptures would be fulfilled.” This phrase points to the fact that God allows certain things in His wisdom to fulfill His plan of salvation. Mary pondered all of this and must have wondered at the strange and mysterious ways that God chooses to save us. She is the only one who can perfectly balance immense sorrow for the death of these innocent babies with complete trust that God brings good out of every tragedy and uses them to bring about the fulfillment of His plans.

When we are faced with trials and wonder why God is allowing a certain suffering in our lives, let us have the faith of Mary, who “believed that what was spoken to [her] by the Lord would be fulfilled.” (Luke 1:45)

These past few months have surely been filled with many unexpected difficulties and challenges, yet there were probably also many little blessings and surprising gifts as well…maybe even ones that were hard to see at first. Human life is full of joys and sorrows; so too was the beautiful life of the Blessed Mother, who was entirely conformed to the will of God from the moment of her conception. The joys and sorrows of her life form the jewels of her heavenly crown and, at this very moment, she sits beside her Son on the throne of Heaven and intercedes for us.

Now, more than ever, we are called to unite our happiness and our suffering to the Immaculate Heart of Mary. In doing so, she gently leads us to the merciful Heart of Our Lord and the ineffable love of the Trinity. Please join us this summer as we contemplate the joys and sorrows of the heart of Mary in our series, The Coronation of Love; The Joys and Sorrows of Mary. Each week, we will explore a paired joy and sorrow of Mary which will help us to further unite our pondering hearts to that of the Blessed Virgin. We look forward to praying through these mysteries of our faith with you. God bless!

In the Peace and Love of Christ,
Gretchen, Thomas, Victoria & Patrick

Hi! My name is Patrick Kelly, and I am an aspirant with the Dominican Friars of the Province of St. Joseph (Eastern Province). I grew up and live in Virginia. I am in my second 6-month fundraising period with the Laboure Society. I am hoping to mitigate my student loan debt in time to enter the Novitiate next summer.
Watch My Video   Read My Story   Donate   Contact

Hi! My name is Victoria Clarizio and I am an aspirant with the Passionist Nuns of the Monastery of Our Lady of Sorrows in Pittsburgh, Pennsylvania. I am from Connecticut and live there currently. As an aspirant with the Laboure Society, I hope to remove the obstacle of student debt so that my classmates and I can enter formation.
Video  Story  Donate  Contact

Hi my name is Thomas Conroy, and I am an aspirant with the Dominican Friars of the Province of St. Joseph (Eastern Province). I was born and mostly raised in Northern Virginia. I graduated from Mount St. Mary’s University in 2019. I am in my second 6 month fundraising period with the Labouré Society. I am hoping to have my student debt mitigated and enter formation next summer. Video  Story  Donate   Contact