Labouré Aspirant Norvilia Etienne is interviewed by The Tablet 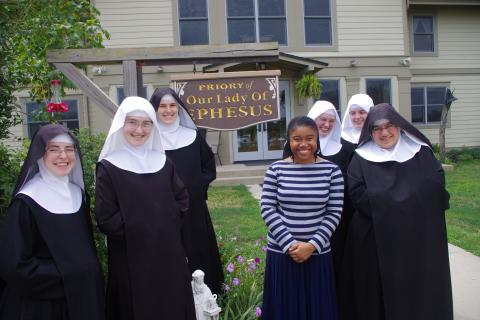 “Yes, there is a vocation crisis, but we have to realize student loans are a substantial inhibitor to our vocations and the people wanting to give their lives,” said Norvilia Etienne, a college student in her final year of study at Queens College.

Last February, the parishioner from Holy Family, Fresh Meadows, petitioned to enter the religious community of the Benedictines of Mary, Queen of Apostles. After evaluation, she was accepted into the order. Except there was one catch – she must be free from any financial debt, including student loans, before she could enter as a candidate.

“I want people to know that it is a problem, first of all,” Etienne said. “It’s a problem and it’s affecting a lot of people who are wanting to become religious.”

A 2012 study by CARA for the National Religious Vocation Conference found that while most religious institutes have a written policy or accepted practice on educational debt, 70 percent of the religious communities where more than three candidates had educational debt reported turning someone away. In the same study, 80 percent of those communities asked potential candidates to delay their application because of debt.

Not all religious institutes have the capacity to take on the educational debt of candidates and according to the same study, some assume the debt and pay it off over time or ask candidates to defer their loans. A small number pay interest on the student loans until the member professes perpetual vows.

When Etienne graduates next spring, the unpaid debt from her undergraduate degree would pose a potential roadblock to joining religious life. So her Benedictine Sisters introduced her to The Laboure Society, a non-profit that helps people who want to join religious life or the priesthood by raising funds to pay off their loans.

Sitting inside a booth at a Fresh Meadows diner, the rising college senior displayed characteristics most students portray during summer break – easy-going, calm and hungry for adventure. Her laugh was infectious as she dived her fork into a vegetarian omelet as big as the hat on her head.

The price tag comes from a fundraising pool that averages the amount each candidate must strive to reach even if they owe more or less money. Etienne is one student in a class of 17 whom their diocese or religious community has accepted, but who lack the financial freedom to enter. With assistance from The Laboure Society, their donations will be doled out among the class and applied to students’ loans over a set time period.

In an email to The Tablet, Laboure’s Director of Admissions Maritza Sanchez stated that their organization assisted candidates from a variety of backgrounds including doctors, nurses, nurse practitioners, lawyers, teachers, therapists and even artists.

One wonders what goes through the mind of a college student who not only has her final year of studies to undergo, but on top of that, must raise thousands of dollars to join an order of singing, and Billboard chart-topping, Benedictine nuns?