The Coronation of Mary; Queen of Wisdom, Mother of Love

God graced Mary with a number of unique and extraordinary graces. However, neither the Immaculate Conception, nor the Assumption, nor any other particular grace God bestowed upon her crowns and honors Mary so much as her humble obedience to the will of God. Mary’s unique participation in the glory of her Son is given to her through the merits of Christ, so Mary’s glory is, as with all God’s saints, a sharing in Christ’s glory. Mary’s “fiat” mirrors the obedience of her Son, Who “humbled himself, becoming obedient to death, even death on a cross. Because of this, God greatly exalted Him…” (Phil 2:8-9) In His life and by His death, Christ showed the way for all His disciples to be raised to glory through obedience to the Father’s Will – as He said “I have given them the glory You gave Me” (Jn 17:22). 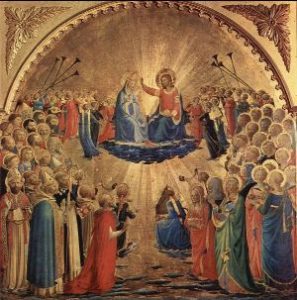 Mary was obedient to God’s will throughout her life, and in this way she preeminently shares in her Son’s glory. As our Lord says, “blessed are those who hear the word of God and observe it,” and none kept it better than Mary who said “be it done unto me according to thy word” (Lk 11:28; 1:38). By her constant and ready obedience to the will of God, Mary, already preserved free from the stain of original sin, also never committed or consented to even the smallest sin throughout her entire life (cf. CCC 411).

For we who are “mourning and weeping in this valley of tears,” Mary is both hope and exemplar. Would we keep from sin and hold on to the hope of Heaven? Then let us follow Mary’s example and pray that we might receive from God the grace to be as obedient to His will as she was. For the life of Mary testifies to the truth that “sacrifice and offering you do not want … so I said, ‘see; I come… I delight to do your will, my God'” (Ps 40:7-9).

Indeed, God wants nothing from us but ready obedience to His will. God made us to be happy, not necessarily in this life, but in eternity with Him. Our sure way home, then, is to do His will. Mary’s obedience is her crowning glory and her lowliness is her crown, for “the humble of spirit acquire honor,” and “the one who humbles himself will be exalted” (Prov 29:23; Lk 14:11). Who of all God’s saints has been exalted more than Mary, who we venerate because God has made her so venerable as Queen of Heaven and Earth? Indeed, “He has looked upon His handmaid’s lowliness,” so Mary, who always heard the word of God and kept it, proclaims forever: “…behold, from now on will all ages call blessed” (Lk 1:48).

I will put enmity between you and the woman, and between your offspring and hers; They will strike at your head, while you strike at their heel. ~Genesis 3:15

The Blessed Mother, since the moment of her fiat, surrendered the entirety of herself to the will of God and, in doing so, consented to her role as Queen of Heaven and earth. In submitting her will to that of the Creator, she became the Queen of Creation and the Mother of the Church. The Catechism of the Catholic Church states: “By pronouncing her ‘fiat’ at the Annunciation and giving her consent to the Incarnation, Mary was already collaborating with the whole work her Son was to accomplish. She is mother wherever he is Savior and head of the Mystical Body.” (CCC 973)

It is this total surrender to the will of God that raised the Blessed Virgin Mary to reign as Queen of Heaven and earth, and it was her “yes” at the Annunciation that has allowed her to play an integral role in conquering sin and death for our salvation. In agreeing to be the Mother of God, she became an instrument of salvation by bearing Christ in her womb; from the moment of her immaculate conception, God chose Mary to be His mother. St. Irenaeus, in his work Adversus Haereses, states that “He is one and the same, who formed us at the beginning, and sent His Son at the end, the Lord did perform His command, being made of a woman, by both destroying our adversary, and perfecting man after the image and likeness of God.”  (AH 5.21.2) Being born of a woman, namely the Blessed Mother, Christ became man and gained for us our salvation. In giving birth to our Savior, Mary crushes the head of the serpent; Mary joins her Son in conquering sin and death and becomes both our Mother and our Queen.

Indeed, Mary is our Maternal Queen, who guides us ever closer to her Son through her intercession and example. Pope Paul VI’s 1964 constitution Lumen Gentium exalts Mary as “‘the mother of the members of Christ . . . having cooperated by charity that faithful might be born in the Church, who are members of that Head.’ Wherefore she is hailed as a pre-eminent and singular member of the Church, and as its type and excellent exemplar in faith and charity.” (LG 53)  It is by the graces merited through her intercession and by closely following her example that we, ourselves, can rise above sin and death, striving to live a life of virtue that leads to eternal life. It is through the Blessed Mother’s example that we can be ‘perfected in the image and likeness of God.’ Mary, Queen of Wisdom and Mother of Love, pray for us!

COME PRAY WITH US!

“For where two or three are gathered together in my name, there I am in the midst of them.” ~Matthew 18:20

Right now, more than ever, we called to come together as a Church to pray and to engage with the beautiful mysteries of our Catholic faith. As a response to this invitation, we are launching a weekly prayer and discussion group called Quarantine Conversations, which will follow the theme of the reflections of the Quarantine Contemplation series. Each week, we will meet on Friday evenings at 6:30pm CST/7:30pm EST to pray a decade of the Rosary followed by a short reflection and time for discussion. Please join us for all or part of these meetings, so that we may join our hearts in praise of our glorious Creator!

Hi! My name is Phillip Baker and I am an aspirant with the Dominican Friars of the Province of St. Joseph (Eastern Province). I am a native of Nashville, Tennessee, where I currently reside as I work to pay off student loan debt from my time at Syracuse University. This is my first 6-month class with the Labouré Society, and I anticipate entrance to religious life with the Friars this July.
Watch My Video   Read My Story   Donate   Contact