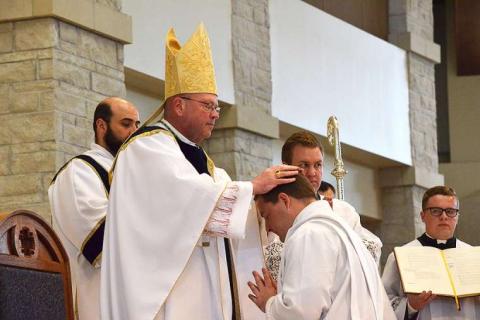 WICHITA, Kan. — Father Chad Arnold, vocations director in the Diocese of Wichita, Kansas, is hesitant to dole out advice about how a diocese can increase its priestly vocations.

He recognizes that he has been blessed.

At a time when bishops and vocations directors across the universal Church are wringing their hands about a dire shortage of priests, Wichita has ordained 10 men to the priesthood for the second year in a row, upping the priestly population there by about 20%.

“I wish there were an easy, A-B-C sort of answer, but, in reality, it’s so many things we are blessed with that I believe aid our vocations,” Father Arnold told CNA.

One of those things is a commitment to perpetual-adoration chapels in diocesan parishes.

“We have a high number of perpetual-adoration chapels throughout our diocese, so we have a lot of young men spending time before the Lord in the Blessed Sacrament,” he said. “That moment of silence is so critical to hear the Lord speaking to them, so that availability is there.”

The diocese has also been blessed with priests “who work hard and live their faith and take joy in their priesthood and provide tremendous examples and models for the young men in the parishes,” Father Arnold added, as well as good and faithful bishops who have directed the diocese well.

Six men who were ordained as priests of Wichita have since become bishops, including Bishop Shawn McKnight, who was installed in February as bishop of Jefferson City, Missouri. The diocese, which sits in the southeast corner of the state, covers 20,021 square miles across 25 counties and is home to 114,195 Catholics in 90 parishes. While most of these parishes are covered by one priest, the recent bumper crops of priestly ordinations mean that some larger parishes with hundreds of families are able to have two or even three priests.

“It’s extra camaraderie, working as a team to get together and assess certain situations and try to come up with a positive, spirit-filled response, rather than just one person himself mulling over a task or a challenge,” Father Jerome Spexarth, who just gained a new priest at his parish, told The Wichita Eagle.

“It’s been a great aspect of teamwork. Jesus does send out the apostles two by two,” he added.

“I think people teaching the faith in those schools who take their faith seriously and earnestly and have a joyful, loving faith with Our Lord and are able to pass it on,” he said.

The culture of the Midwestern Plains state is also one of those “intangibles” that nonetheless is an important contributing factor that encourages vocations, Father Arnold noted.

The diocese is mostly made up of small, rural towns where churches are often the center of social life, big families aren’t an anomaly, and the idea of stewardship is embedded in the culture.